Milkshakes, Mermaids and Murder (8th Ellie Avery)by Sara Rosett – Organizer Ellie Avery and her family plan to take a vacation in Florida. Things first go wrong when her pilot husband is delayed in Canada. Next, the designer handbag Ellie ordered turns out to be a very poor knock off. Ellie talks to the seller, Angela, and plans to return it for the right bag in Florida, but instead Ellie finds Angela floating face up in the swimming pool of her apartment complex. What makes matters worse is that Ellie’s brother Ben becomes a suspect as he has recently broken up with party girl Angela. As Ellie begins to unravel the mystery, Ben goes missing and Ellie and her family are threatened if they don’t deliver what they’ve been asked for! A fast paced, light fun read. The book also has organizing tips at the end of each chapter. Personally, I would prefer they were all placed at the end of the book as I find them distracting. However, a nice, fun, beach read. 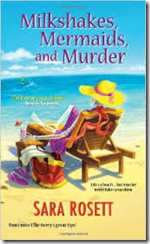