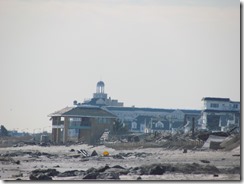 This year marks the four year anniversary of Hurricane Sandy, one of the most destructive storms in the Atlantic. As the storm raged through the Atlantic Ocean, it swept through eight countries, killed approximately 230 people, and caused massive loss and devastation. In the US, the storm affected 24 states and cost approximately $75 billion dollars, second only to Katrina which was over $100 billion dollars. Loss of homes numbered in the hundreds of thousands in NJ along with loss of roads, electric, and transportation across the US East Coast. The NYSE and Nasdaq were closed for two days. Weeks ensued with roads being blocked by tons of sand, as well as limited amounts of fuel and supplies. Flooding complicated matters in many states. However, relief flooded in from FEMA, Red Cross, rescue and response teams, disaster workers, utility workers from other countries, as well as a live telethon featuring stars to raise money for hurricane relief. Many organizations contributed and pitched in to help restore basics. Although much has been restored, there are families who are not yet back in their homes and popular establishments continue to be demolished in the aftermath of the storm, all waiting to rebuild in hopes of living peacefully by the sea.

People are strong. They rebuild, reorganize and always remember! Our novels keep these devastating historical events as well as the courage, emotional perspective and outpouring of help in the immediate aftermath alive.

The photo above was taken from the beach of Spring Lake, NJ looking at one of the pavilions situated on the Spring Lake Boardwalk. The boardwalk was completely washed away during the storm. The pavilion and the boardwalk have since been rebuilt.