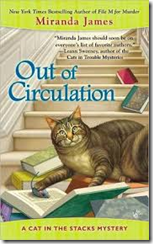 This is the 4th book in the Cat in the Stacks Mystery series. Charlie, the local librarian of Athena, Mississippi, is asked to help solve another murder. He has help from his Maine coon cat, Diesel.  In this novel, a rich woman by the name Vera Cassity is in a social war with the Ducote sisters. During the annual library fund-raising gala, the local back stabbing continues between many characters, until Vera is found dead, on a back stairway used only by staff. Unfortunately, Charlie’s own housekeeper is the person trapped in the stairwell with the body. The Society sisters are upset that something of this nature should happen in their home. The suspects abound as Vera was a vile, nasty woman of society.  Charlie is asked by several people to help the investigation and find the truth. However, Charlie finds out a few truths hidden for years and doesn’t quite know how to reveal the information. Despite that, he will try anything to clear the name of his housekeeper.  I enjoy the Cat in the Stacks Mystery series. The characters have grown very well over the last four novels.  In this book, Charlie did not interact with the police at all. Most of his investigation was on his own.  An entertaining cozy series. Diesel is a main character in his own right. He doesn’t actually solve the mysteries but is a great friend and faithful pet to all. A quick, fun read.