The Ghost and the Dead Man’s Library

The Ghost and the Dead Man’s Library

The Ghost and the Dead Man’s Library is the third book in the Haunted Bookshop Mystery – Penelope Thornton-McClure and her Aunt Sadie are given a rare collection of Edgar Allan Poe’s works. Within an hour, the gentleman who donated the books is found dead. Quickly thereafter, some of the leather-bound books are purchased for high sums of money. Before long, one of the buyers is found dead and Penelope is arrested for a crime she didn’t commit. It was rumored the books contained a secret code which would lead to treasure. With help from her friends in her Quibblers group, she tries to solve the mystery and clear her name. Fun, fast-paced mystery. I love the relationship between Penelope and the Ghost of Jack Shepard, the hard-boiled Private Investigator who died of lead poisoning in her shop years ago and was now bound to stay there. He helps her solve the mystery as well, 1940’s gumshoe style. As the book evolves, we learn a little more about Jack and what his life was like before his death. I would say however, that some of the risks she takes, leaving her son and committing petty crimes, especially when being watched by police and being out on bail are a bit farfetched but lend to the overall plot. 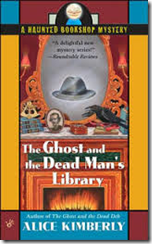