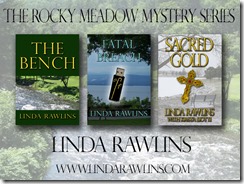 Welcome to Rocky Meadow, a fictitious town in VT where we meet many interesting people. Dr. Amy Daniels was a trauma surgeon in Boston. She was often called in on an emergency basis to treat trauma victims, stories unknown. She saved a man and later found out he was shot by police after he had killed her sister in a home invasion. Dr. Amy had serious difficulty dealing with the death of her sister and her role in saving the life of a murderer. She decides to leave the trauma arena and flee to a rural hospital in Vermont in hopes she can find the peace and quiet to understand the meaning of this horrendous event in her life.

Father Michael Lauretta is the pastor of St. Francis Church. He was sent to Vermont, to run the retreat in order to serve his fellow clergy as a psychologist when their personal issues became too much for them to handle. In The Bench, we meet several priests being counseled for issues such as alcoholism, coping with end of life, and anger. One day, Father Michael meets Dr. Amy on a bench on the edge of the St. Francis grounds. They help each other work on their personal issues, while finding a ray of hope and reason to believe in their journey.

Katie Novak is the rectory cook and housekeeper. She accepted the position, sold her farm, and moved in to the rectory after her husband passed away from cancer. Katie keeps everyone together and is the heart of St. Francis.

Willow Davis is a teenager who was abandoned by her parents and raised by her grandmother. She had a wonderful relationship with her grandmother. After being home schooled, they would sing as they cooked and her grandmother would brush Willow’s hair as they shared stories about their day. Grandmother died one day after receiving her insulin, however an investigation reveals the drug may have been tampered with. Willow becomes a very rich teenager due to her inheritance, but someone decides it might be better if they dispense with Willow and collect the money for her.

Tony Noce is a former cop with the NYPD who inherits Hasco’s Bar and Grill when his partner was killed in the line of duty. Tony decides to leave NYPD and run the bar where he helps the St. Francis family deal with some real nasty people.

All the lovable characters come together to find a killer, solve a mystery and protect Willow in The Bench. The series continues as the loving makeshift family continue to solve mysteries while working on their personal issues in subsequent books in the series. Each book can be read as a stand alone or start with the beginning and get to know them as they grow. Available at Amazon, B&N and wherever books are sold. Featured on the Braintobook blog on July 31st, 2015 – http://www.amazon.com/Bench-Linda-Rawlins-ebook/dp/B004WOY5RY/ref=tmm_kin_swatch_0?_encoding=UTF8&qid=1438301165&sr=8-1