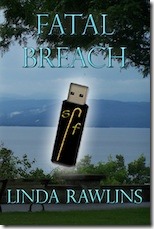 Dr. Amy Daniels has left behind the fast paced life and pain of tragedies in Boston for the slower life of Rocky Meadow, Vermont. Little does she expect when she accepts the position of temporary medical examiner that her life in Boston will look calm compared to the murder case she becomes embroiled in.
Ms. Rawlins has successfully mixed the ingredients; an illegal flash drive, murder of a homeless man and a best friend who happens to be a priest as well as a suspect, into a suspenseful, action packed mystery.
A homeless man is the unintended victim of a murder at a local soup kitchen. Father Michael Lauretta rescues the intended victim, Jimmy Griffin. Jimmy is injured in the rescue and he along with Father Michael is taken to the hospital via ambulance. Dr. Amy Daniels, as acting medical examiner is called on to assist FBI Special Agent Marcus Cain in figuring out who and why someone is trying to kill Jimmy.
The more Amy learns of the murderer’s intent, the more she and Father Michael along with their church and hospital community are pulled into the murderous web of a secret organization known as Shepherd Force.
Shepherd Force starts by simply threatening Amy’s life if she doesn’t produce the mysterious flash drive that started the whole chain of events. Jimmy Griffin lost the flash drive and has no clue where it could be. The FBI suspects that he either knows where it is or he has given it to someone, like Father Michael for safekeeping. Shepherd Force wants the drive and they don’t care where it is or who they have to kill to get it as long as they get it. One major problem emerges: Neither Fr. Michael or Amy has any idea where the flash drive is.
As more time passes and the flash drive does not materialize, the impatient Shepherd Force ups the stakes as they begin to threaten Amy’s teenage friend and Fr. Michael. Even a relaxing evening out with a colleague leads to a dangerous car chase through the winding roads of the Vermont Mountains. Amy and her colleague survive unscathed, but now the ante is raised and the clock is ticking. Amy and Marcus must find a way to produce the flash drive or convince Shepherd Force they don’t have it or know where it is.
In one last final play Fr. Michael, Dr. Amy and Marcus Cain set up a plan to trap the people that are threatening the life they all hold dear.
Along with the mystery, we witness Amy’s journey to find herself and carve out a new life in this rural community. Her church family, including some very human priests and the hospital staff take her under their wings to accompany and guide her on this perilous journey.
For this reader it was refreshing to see the priests in Rawlins’s novel having human feelings and struggles. I spent all of my childhood and early adulthood viewing priests on a pedestal that I had erected. They appeared unapproachable as people and friends, and perfect human beings that I could never be. In Rawlins’s novel we see the priests as people on our level, approachable, capable of feeling, even having flaws and demons that they struggle with.
The priests and the church are also central to the story, a part of the life of the story, instead of being relegated to the sidelines with an occasional hospital visit or random confession.
Without preaching or beating the reader over the head, Ms. Rawlins has given us a story where in spite of the trials the characters rely on their faith and each other to get through the difficulties they encounter. From Katie the priest’s cook and the mother figure for all, Willow the orphan teenager who has been taken under wing, to even the hard broiled FBI agent, Marcus Cain, we see well developed characters that bring the story to life. Even the two priests, Fr. Victor and Fr. Michael are nicely fleshed out and we see a set of characters that are human, dealing with all the ups and downs of human life in a small town.
Although part of a series, this book can be read as a stand-alone novel. There are a few references to things that happened in the first book. Having not read the first book, I had no trouble following the story, as references to the past are so subtle that you do not need to know the complete history to read and enjoy Fatal Breach.
I highly recommend this book. It is an enjoyable fast paced read that keeps the reader engrossed in the story right up until the exciting end. I give Ms. Rawlins five stars and if I hadn’t already read the third book in the series I would be rushing out to read the next installment. I think instead I will read the first book and see where it all started.