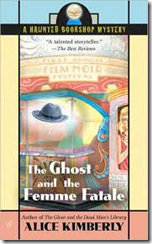 The town of Quindicott, Rhode Island is holding a Film Noir Festival, hosted by the newly renovated Movie Town Theater. One of their supporters is none other than famous 1940’s screen actress, Hedda Geist. The legendary femme fatale is almost killed when she makes an on-stage appearance for the first time in many years. The next morning, a book signing for another guest goes horribly wrong and ends in death.
The bodies continue to pile up from there! It turns out the deaths are related to a cold case from the files of Jack Shepard, an Private Investigator who was gunned down in 1949 in an independent bookstore now co-owned by Penelope McClure Thornton. Luckily, it so happens that Jack’s ghost haunts the bookstore and has already helped Penelope solve a few murders. As a matter of fact, Penelope has found that she can “interact” with Jack in her dreams.
In The Ghost and the Femme Fatale, the fourth Haunted Bookshop Mystery, Jack and Penelope work together to solve multiple homicides crossing over decades in time. It seems Hedda and friends have been involved in murder in the past. The film festival is the first time they all meet again with explosive results.
Jack can take Penelope back to the 1940’s while Penelope can discuss things with Jack in the current year. Their relationship heats up in both decades and solving murders is only part of their worries.
I fully enjoyed this mystery and I love this series. It combines cozy mystery with a classic film noir PI and a paranormal element while Penelope and Jack Shepard sort out cold cases, murder, mystery and hormones. Great read!