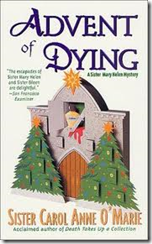 Advent of Dying is the second book about religious sleuth Sister Mary Helen, written by Sister Carol Anne O’Marie in 1986. In Advent of Dying, Sister Mary Helen’s ecclesiastic secretary, Suzanne, invites her and several other nuns, to a bar, to witness her debut as a blues singer. No one was as shocked as Sister Mary Helen who always suspected Suzanne of being a former nun. When Sister Mary Helen goes to speak to her the following day, she finds Suzanne dead with a silver letter opener protruding from her chest, her apartment in total disarray. Feeling guilty for not listening to Suzanne when she was approached in the past, Sister Mary Helen decides that she and her faithful group of close nuns will help San Francisco homicide inspector Kate Murphy and her partner, Dennis Gallaher, solve the crime. As they dig deeper and closer to the truth, she is amazed at what she finds out about Suzanne as well as being threatened and stalked by the killer.
Advent of Dying is the second mystery of eleven books starring Sister Mary Helen. Sister Carol Anne O’Marie, who passed away in 2009, was a Sister of St. Joseph of Carondelet for forty-five years and ministered to a homeless women’s shelter in Oakland, CA which she co-founded in 1990. Her book is an enjoyable, light, humorous mystery, with a main character who exudes the stubborn tenacity of a religious educator on a mission. The character development is enjoyable and well done – especially that of Sister Eileen and her other religious colleagues as they reveal themselves to be more humanistic and socially aware than expected.
The denouement was a tad lack luster and I wanted more explanation but overall Advent of Dying was a wonderful, feel good kind of mystery that makes you want to go to church just to have the pleasure of meeting Sister Mary Helen.