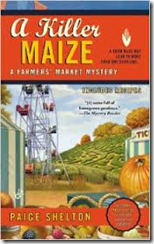 A Killer Maize by Paige Shelton is about the Swayton County Fall Festival. Becca Robins and her friends from the Bailey’s farmer market agree to sell their wares at the Festival. Unfortunately, there are no customers until the Ferris wheel operator is brutally murdered and hung from the top car. Suddenly, the Festival is packed with customers. Questions abound as the search for a killer begins. Some of the market vendors consider leaving their stalls but Becca has to stay as she is donating all the pumpkins for the much anticipated corn maze due to open on Wednesday. The difficult corn maze is surrounded by gypsy magic, attributed to a woman who was murdered many years ago. The Festival begins each year on the anniversary of her death as a sign of respect. While avoiding killers and scary magic, Becca runs into the second of her two ex-husbands as well as her current boyfriend and a police officer she impulsively kissed a couple of months ago. Becca travels through her own maze of questions and clues to unravel the mystery and find a killer before she becomes a target. A quick fast paced read for those who love being in the country and visiting County festivals with just a hint of gypsy magic.